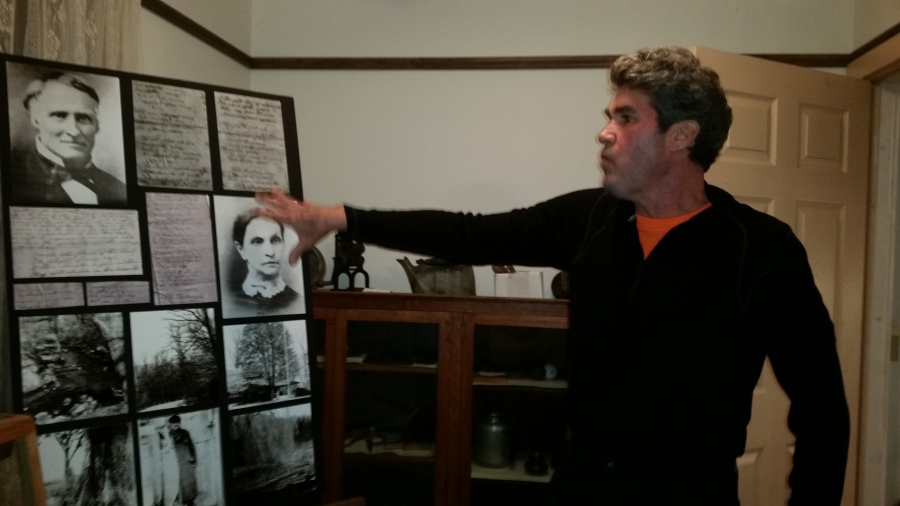 A ghost walk and a history lesson at Fallasburg

Fallasburg, MI- It was a spooky Saturday night before Halloween at the Fallasburg historical village.

The Michigan Paranormal Alliance (MPA), the Fallasburg Historical Society (FHS) and their followers conducted a paranormal investigation inside the Fallasburg museum buildings.

“This has been two years in the making,” said Tina Siciliano Cadwallader, FHS event organizer.

Cadwallader put the first time event together as a fundraiser for the historical society.

The MPA started with an introduction inside the Fallasburg one-room schoolhouse museum. We filed behind the old creaking and squeaky desks much like the students did some 150 years ago. The classroom filled up and there was standing room only.

The ghost detecting equipment such as gauss meters, temperature gauges and nitrogen goggles laid on a separate table by the old piano.

The MPA team set up laser purple dot grids and EVP (Electronic Voice Phenomenon) equipment at each location of the paranormal investigation. That is the Fallasburg one-room schoolhouse, John Wesley Fallass House and David Misner House, all of which sit on the Covered Bridge Road. An MPA team member was at each location to interpret the recordings of the EVP sessions.

We divided into three groups, each led by an FHS docent.

My husband Ludek and I were in the group with FHS president Ken Tamke and Blue Cross Blue Shield (BCBS) employees. We walked down the Covered Bridge Road lighting our way with flashlights. We briefly paused at the Tower Farm, better known as the Tower House. We could not go inside because of its dilapidated interior. The FHS is currently seeking funds to repair the Tower House.

“Two sisters lived here,” said Tamke. “It was normal at the time.”

Tamke said there have been reports of haunting at the Tower House.

Local resident Addie Tower Abel, who went to the one-room schoolhouse, said there has been a lot of activity.

“I know about the Tower House, I lived there. So, did my son, they saw a lot of activities,” Abel wrote on facebook.

Lie Kotecki of MPA conducted the EVP session inside the 1842 John W. Fallass house. The temperature gauge in the middle of the completely restored living room showed 66.6 F. According to the MPA, the temperature drops when ghosts are present causing cold spots. The ghosts also give out electromagnetic fields.

“Drop the temperature if you are inside the house with us,” challenged Lie.

The temperature dropped slightly to 66.2 F.

“Did you live in this house?” she asked. “We have no bad energy.”

“The furniture was built from the lumber out of a sawmill at Fallasburg,” he said. “Orwin Douglas built the Tower House and John Waters built the David Misner House.”

Back at the schoolhouse, Rosemary Leleiveld reported various ghost encounters.

But, Tamke said it could have been the ghost of Fallasburg resident Ferris Miller, who had died within the last five years.

“We have modern devices,” said Rosemary, “but we come with respect.”

The next EVP session followed at the Misner House. It is the most completed museum out of the Fallasburg portfolio, according to Tamke.

The MPA members usually turn off the lights for the sessions, although they have done EVP sessions in the middle of the day.

Jason Kotecki, IT engineer at VanAndel Institute, analyzed the EVP recording at the Misner House and reported about other findings. The MPA team conducted a session in Allegan.

“Have you been to the old Allegan county jail?” Jason asked.

“Not yet,” said Ludek Pala.

“Well, we heard a giggle there,” he said.

Peggy, a nurse at Spectrum, said that sometimes she questions her sanity.

“It’s mostly a boring thing to do,” she said. “We do a lot of recordings and a lot of listening. But, you go for the whole package and you relive it.”

“What is your name? Did you live here? Did you have children? Did they go to the schoolhouse down the road?”

The MPA does not solicit business and the paranormal alliance does not charge for their investigations.

“The purpose of the investigation is two-fold,” Rosemary Leleiveld said. “We do ghost hunting and we have ghost hunting equipment at each location. You do a ghost walk and learn more of a history of a location. The architecture draws me in.”

For more info on Fallasburg go to www.fallasburg.org

For more info on MPA go to: www.m-p-a.org

For more info on EW Emma’s Writings go to http://emmapalova.com

One thought on “Ghostbusters at Fallasburg”

This site uses Akismet to reduce spam. Learn how your comment data is processed.